The Ladies 3s were away against Basingstoke in very wet rainy conditions. The first ten minutes of the game were quite even as both sides settled into their stride . After several unsuccessful attacking short corners the deadlock was finally broken when Megan Turner picked up the ball in the middle of the pitch and weaved past several players to slot home the island’s first goal. They kept up the pressure on Basingstoke with more short corners and both Amelia Parker and Alice Aldridge-Snell were unlucky not to score at the far post consecutively just missing out.

The island came out in the second half determined to convert more of the chances they were creating with Lottie Green and Amber Wilmott working hard to disrupt the opposition’s midfield. Their pressure paid off when the ball fell to Alice Aldridge-Snell who swept it home . With their confidence high the pressure was kept up with a third goal for the island this time Lottie Green being rewarded after several short sharp passes into the D. One or two breaks by Basingstoke kept Tia Shutler in goal on her toes. One of those breaks caught the island defence napping and Basingstoke were able to send the ball up to their player who was goal hanging the whole game, despite Tia Shutler diving spectacularly she smashed it home for their only goal . Woken up by that surprise attack the island’s ladies rallied and were awarded a penalty flick. Captain Cathy Somekh stepped up to take it but was denied by a fantastic save by the Basingstoke’s goalkeeper who pushed her shot up and off the crossbar. Encouraged to push forward Kaitlyn McFarlane, in her debut game, was determined and strong in mid field, backed up by Vicki Brodowska and Beth Branson in defence.The island’s pressure was rewarded when Amber Wilmott was able to pick up one of Amelia Parker’s fantastic crosses into the area and slot it home, swiftly followed by her second goal nudging the ball over the line to get the island’s 5th goal. Amelia Parker’s hard work in the D paid of a few minutes before the end of the game, when she was able to get the last touch in a goal mouth scramble and secure the match. Player of the match was Cathy Somekh. Final score 6-1 to the island. A huge thank you to the drivers who came to the rescue at the last minute and Aly Townend for umpiring. 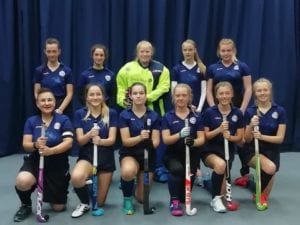 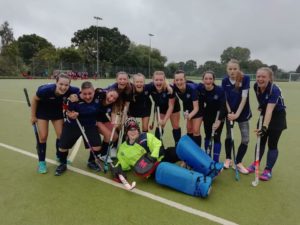 We are an ambitious club running successful men’s and women’s sections and a thriving junior section. We welcome members of all ages and abilities.